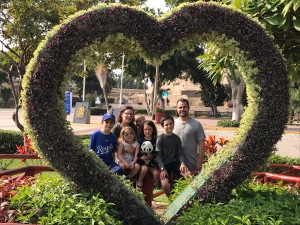 We simply love Jesus and want to be faithful disciples of His. There is really nothing special about us except for the redemption of Christ in our lives. We have never thought of ourselves as a “missionary family”. I started in pastoral ministry in 2006 serving as an associate pastor in Dekalb, IL while I completed my Master’s degree at Trinity Evangelical Divinity School. In 2008 we moved to Kansas City to become part of Christ Fellowship of Kansas City in which I became a pastor. While in Kansas City I was a bi-vocational pastor – working in the claims department as a supervisor for a major insurance company where I lead several evangelistic Bible studies during my lunch breaks.

Over the years the Lord grew in us a greater heart for the gospel among the nations. Therefore, we began praying for and giving sacrificially to missionaries and eventually our passion became an overwhelming burden to go ourselves.

After spending two years further preparing for the mission field by being on staff at a missionary training school as well as helping to plant a church in Northern Mexico, our family felt ready to begin our first term on the field full-time. Thus, in late 2015 we arrived in Costa Rica to do about 10 months of language school and then arrived in Cusco, Peru in November 2016.

Our vision is twofold: 1) to partner with and train Peruvian pastors, leaders, and missionaries to make disciples among the unreached with the gospel of Christ and 2) to strengthen the Peruvian church by entrusting biblically sound teaching to faithful men who will be equipped to teach others.

One thought on “Our Story”