“If Mr M cannot go with’ I can go to Village CD with you,” said Mr J (one of the believers in village EZ) in Spanish of course. “Okay thanks, I believe Mr M knows a lot of people there. How many people do you know there?” I responded. “Um, maybe one but I am not sure if he lives there. Oh and I only have an hour.” Mr J’s offer was kind but boy I wanted Mr M to accompany us on our exploratory trip to Village CD to check out the prospects of planting a church there!

Well, even though we went to his house an obnoxious amount of times Mr M (the believer in EZ who suggested we think about planting a church in Village CD) he was never home. I personally was really set on bringing him with to Village CD on this exploratory trip. He seemed like a much better option than Mr J; after all he has family there and knows several people in this village of about 800. What could we do with the reserved personality of Mr J – wander around? “We need someone who can help us make some relationships,” I thought. But Mr J was our only option to go with us from Village EZ so we prayed that God would do something big and lead us to a “man of peace” (Luke 10). 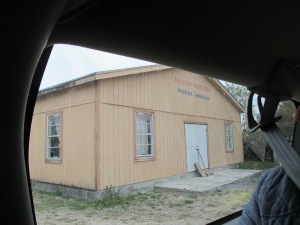 In the end, I realized my question was all wrong. My question was what could we do with Mr J when it should have been what will God do with Mr J. Well, God did something big and it’s not done yet. When we arrived in Village CD we went to the house that Mr J thought the person he knew might live in – no one home. However, we drove by a little wooden Baptist church building that did not look like it was in use anymore. We were told in Village EZ that there was no longer a Baptist church in CD but only a JW Kingdom Hall and a Catholic church. After a couple of us got out to check it out and it seemed clear it was not in use we drove a little farther down the road and stopped to speak with a man outside of his house. We asked him about the building and if there was a church meeting in it. He was not sure but pointed us in the direction of the man who oversees the building.

We arrived at a plywood shack and called out “Buenos dias!” (People just call out in MX – knocking on someone’s door is seen as a little rude.) Out walked an older gentleman, we will call him Mr Jo. We quickly learned that he was EXACTLY the man we needed to speak with. He told us that there used to be a church in CD but they have not had a pastor for several years. He tried to get the believers to keep meeting to read Scripture, pray, and sing but they were not interested without a pastor. He expressed that he really desires to have a church in CD.

We shared with him who we were and our intention to plant a church. Mr J was amazing how he stepped in a vouched for us telling Mr Jo how we are his friends/brothers in Christ and how we come and bless Village EZ each month. I cannot possibly explain how important (and encouraging) Mr J’s support and promotion was in this discussion. It gave us instant credibility. Mr Jo said he would share our intentions with the other believers in the village to get their support as well and invited us to continue to come back which is a big deal because we need an invitation like that from a villager to be able to go do work and/or stay in a village like that. Garry Weaver (Director the church planting teams in N MX) and I gave Mr Jo our business cards as we left.

Our team was absolutely in awe of what God had just done – we showed up on a passing suggestion from a fellow believer in EZ, not knowing anyone, with only an hour to spend, to a village of 800 people and the Lord led us directly to the most important contact that we could have in the village after only talking to one random man before him! We simply showed up with a heart for the Kingdom and God SHOWED UP with a heart for His Kingdom. God is awesome!

But there is still more! Days after our return to home Garry received a call from a woman in S TX who is a part of a church of which Mr Jo’s adult children are members. This church has been praying for and trying to get a pastor down to Village CD to (re)plant the church down there. She stated that after our meeting Mr Jo called his children and told them the believers in the village are “very excited” about our team coming Village CD! This woman stated that she has a lot of information about the village and the believers there that would be helpful to us so, Lord willing, we will meet next week before I leave for Oaxaca for several weeks. Please pray that the Lord would move to have a vibrant evangelical church in Village CD quickly and that myself and others on our team can build into Mr Jo and help to equip him (and other men) to raise him up as a pastor in this church. 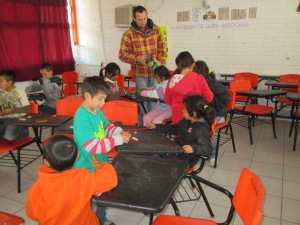 “Escuelita” – our children’s ministry in action.

The rest of our trip was very profitable as well. We had several great gospel discussions with people in Village EZ and I was able to share the gospel in Spanish for the first time with no help from the primary Spanish speaker on the team! I praise God for that even the I still have a VERY LONG way to go in my Spanish. We also had a great time with the children doing our children’s ministry – we have consistent and eager group of 10-12 kids each time. We went through the story of Abraham nearly sacrificing Isaac which leads beautifully to the fact that God did not spare his own Son…Below are some pics from our time in EZ.

Eating in a believer’s home. Mr E is on the left.

Some of the teens/young adults that we are building gospel relationships with. Playing soccer with them has given some great gospel platforms with them.

Ethan learning how to roll his own tortillas.